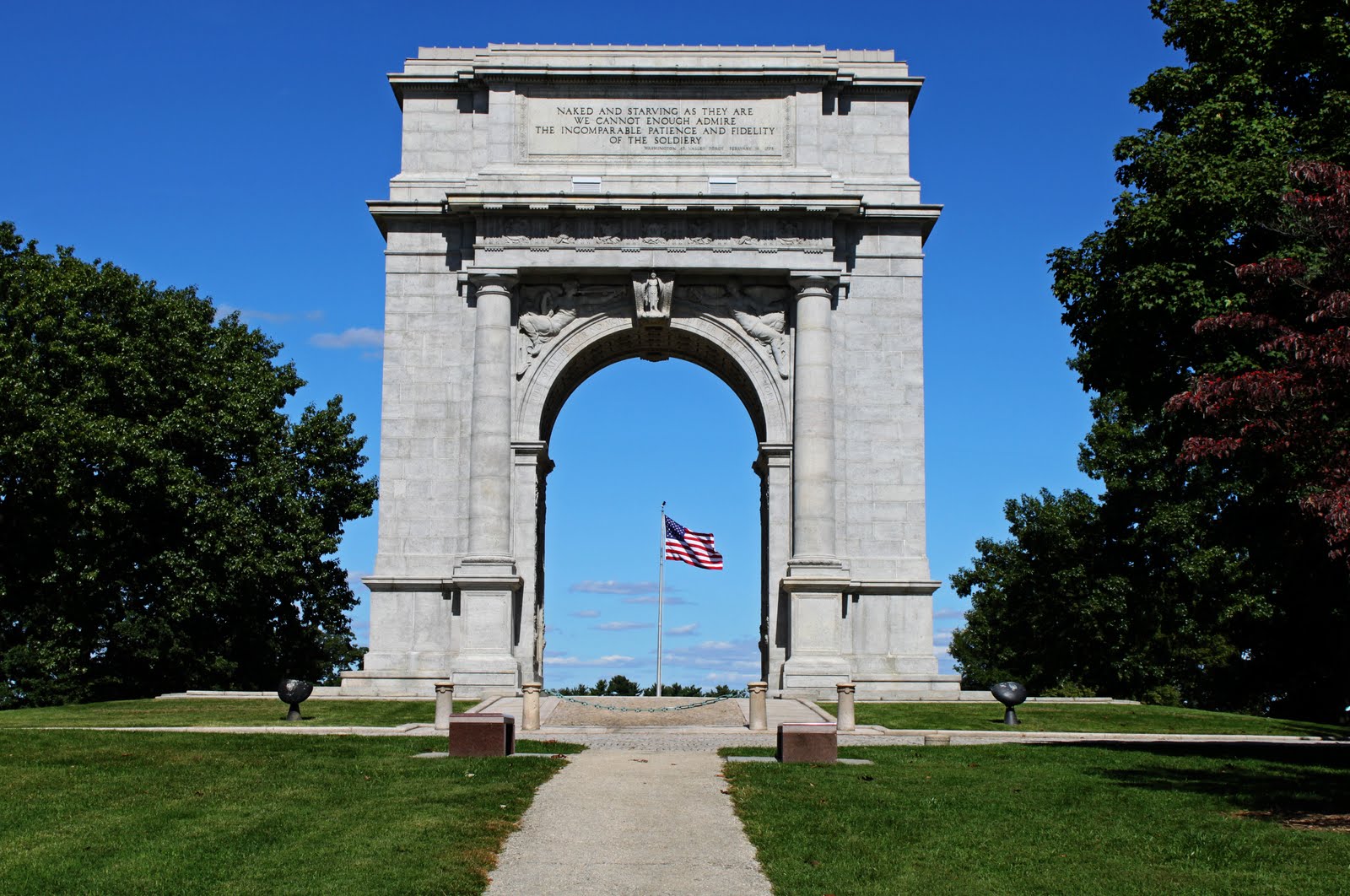 This is the North Outer Line, the British would have had to come up the hill into canon and musket fire. 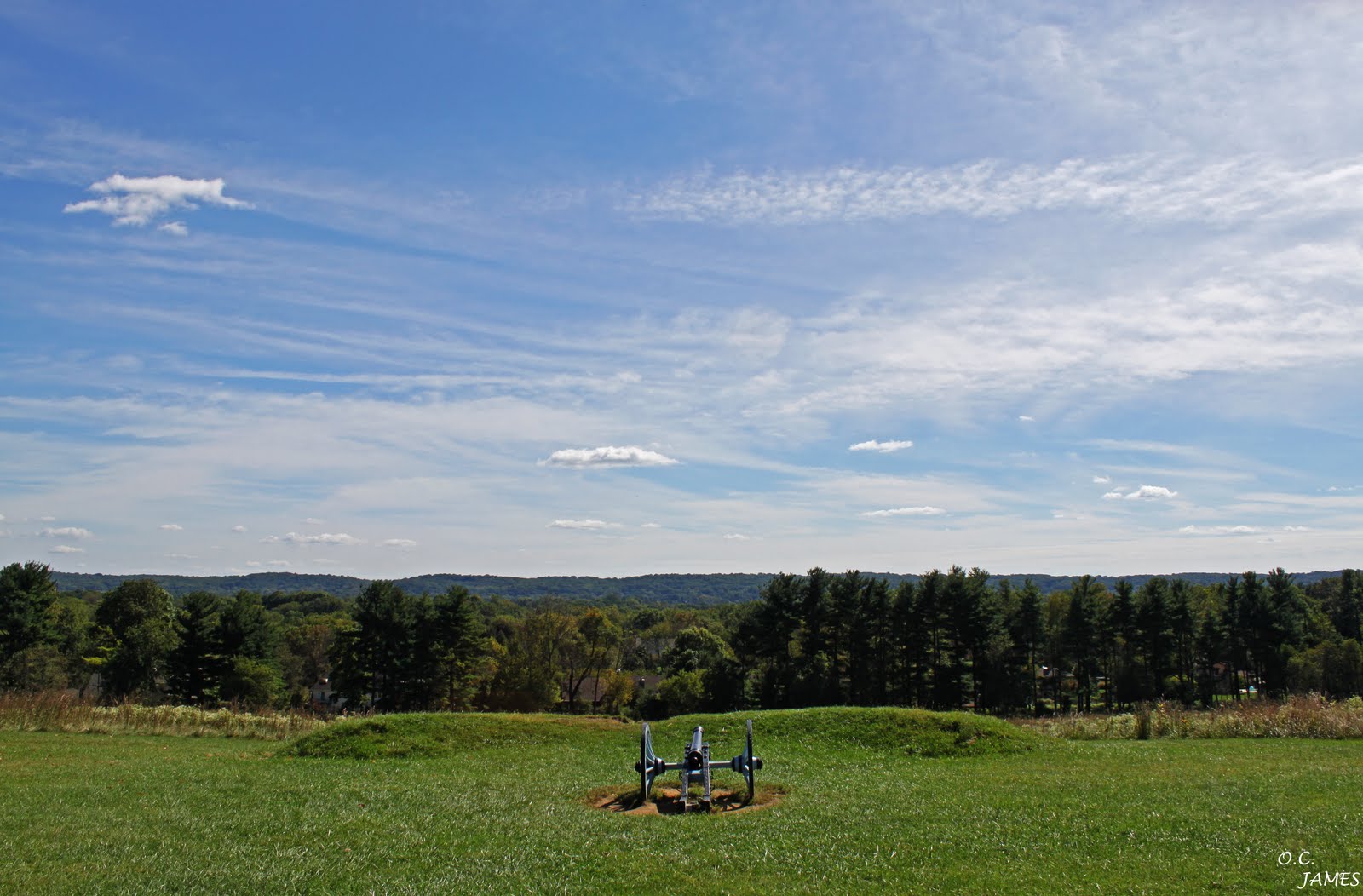 The Continental Army was in this area during winter of 1777-78.
This is a very historic place, it's called Valley Forge, Pennsylvania. It's about a 40 minute drive from my house. It's beautiful and very peaceful now, but during the winter of 1777-78 it was bitter cold and covered with snow. It's the place where the tired, poorly supplied and poorly clothed Continental Army camped for the winter and held their ground against The British Army. By this time the Americans had already lost two key battles, as well as Philadelphia (which is 20 miles northwest) to the British. The Americans under General George Washington used their time wisely at Valley Forge, drilling, building cabins,forts, bridges, etc and maturing as a fighting unit.

The hardships that were indured by the Continetal Army have become ledgend.

"To see the men without clothes to cover their nakedness, without blankets to lie upon, without shoes...without a house or hut to cover them until those could be built, and submitting without a murmur, is a proof of patience and obedience which, in my opinion, can scarcely be paralleled."
-George Washington at Valley Forge, April 21, 1778

What a very grand view! ! I thank for that I was able to come across this eternal landscape. You made me happy enough. Thank you James, again. ruma

I have read a lot about the hardships endured at Valley Forge.
Your first picture is exceptional, the flag against the blue sky is perfect. Always a pleasure to see your posts.
Sunny :)

Great images for a very interesting post. You refreshed my memory about one of the most important places in history and you did it with a perfect choice of words, a great quote and a couple of beautiful photos.

Very interesting post, an a triumph arch is a good way to honor.

It was the time when French people came to help Americans to get their independance, or am I wrong?..
A beautyful place anyway, and so interesting.. The arch is quite impressive; I like memory places like this.

Beautiful monument in the first picture and an awesome looking sky in the second! Loved these pictures!

Traditionally Indian women get mehndi (henna) designs done on their hands for various occasions such as weddings, engagements....this one is bit detailed cause it was done for a wedding.....it's my wife's hand....i clicked this when we were out sightseeing on our honeymoon at Andaman Islands

My grandfather used to take me on historical excursions when I was a child in Pa. I wish now I had paid more attention.

Fascinating post. And errr ... sorry about that little disagreement we had 200 years or more ago.

Beautiful shots of a gorgeous area. I just love historical parks, especially when they are not crowded. You can just feel the history of the area humming around you. Have a great week. Kathy

Great photos and interesting historical notes. I'm a bit vague about American history so these stories help me piece it together.

We Americans seem to have such short memories. We forget the price that was paid for our freedom and independence.

Will have to get back here, one of these days. Spent too much time in Monmouth, NJ...spectacular shots, btw :)

Beautiful shots, interesting notes. Seeing Valley Forge in good weather with grass and an expansive sky...It is difficult for me to imagine the hardships the patriots endured that winter.

Great pics, great post... sadly so much of our youth have no idea about the importance of Valley Forge, Tara is in 7th grade and has yet to learn of the Revolutionary War in school. She told a friend from NY that we were going to Valley Forge one day and he said "What is that?"

Very nice, James. We visited Valley Forge several times when we lived in West Chester...and in my role as a teacher of American history, the story of Valley Forgery usually held the student's interest.

It's a beautiful place...we even had picnics there...but to see all of the artifacts and buildings...yes, it's going to take more trips...

Outstanding post dear James, so informative and interesting as well!
I loved the first shot, your shot is a piece of art!
Léia

The battle fields in PA are beautiful, I hope you show us more of these. Your first shot is impressive...as is Geo Washington's quote...

What a beautiful place!

Great Photos! I visited Valley Forge back when I was in Grade School. (Many Moons ago!) I don't remember much about it. I need to go back... it looks beautiful! :)

You Americans have soooo many interesting battlefields. Interesting because I usually think of how the US fought in Europe and have never had to fight on their own land. WRONG!

enjoyed your post so very much...i wasn't too very far from you a couple weeks ago. it rained the entire weekend so my picture taking was very limited...
have a great week.

Your photographs are beautiful ... I feel like walking into them! Thank you so much for sharing your part of the world with us.

What a beautiful day to visit the monnuments. Great shots and very interesting post.

We were there in November of 2007. It is worth a trip from Virginia to see this, especially in the fall.

What a beautiful, inspiring and informative post, James! Your photos are so gorgeous! What a wonderful day it must have been! Thanks for sharing it with us!

Have a great week!

Great post and beautiful photos of Valley Forge. Thanks for sharing.

Gorgeous photo, James. I enlarged it so I could read the words. Great reminder of what the soldiers went through.
I was there along time ago and it is a wonderful park, so full of history.

Very nice. I agree with B Squared comment about how much was sacrificed for our freedom.

James, you have great adventures and photographs, and your shots aare impressive. Thanks for sharing its history.

P.S. I will join your meme starting this Friday. I have not been taking outdoor shots because of our extreme heat. See you around!

They didn´t build this stuff here to admire the views. That´s too bad because they are worth it.

what a great memorial. and eventhough they don;t build it for the view, nevertheless the views are so awesome.

What a nice recall of history and historical world you have.

Grand shot!
the most valueable part of a nation's history is freedom fight!

We all must feel proud to feel the glory of those days.

Simple and beautiful composition. Like all the other shots on the blog. Love it.

Your Image's of Valley Forge are very good. Have been there myself and enjoyed this place of History. I think that I have posted my visit on my Blog. Thanks for sharing.

James you have great work. Can I purchase some of your photos? Contact me if possible. www.justprep.com