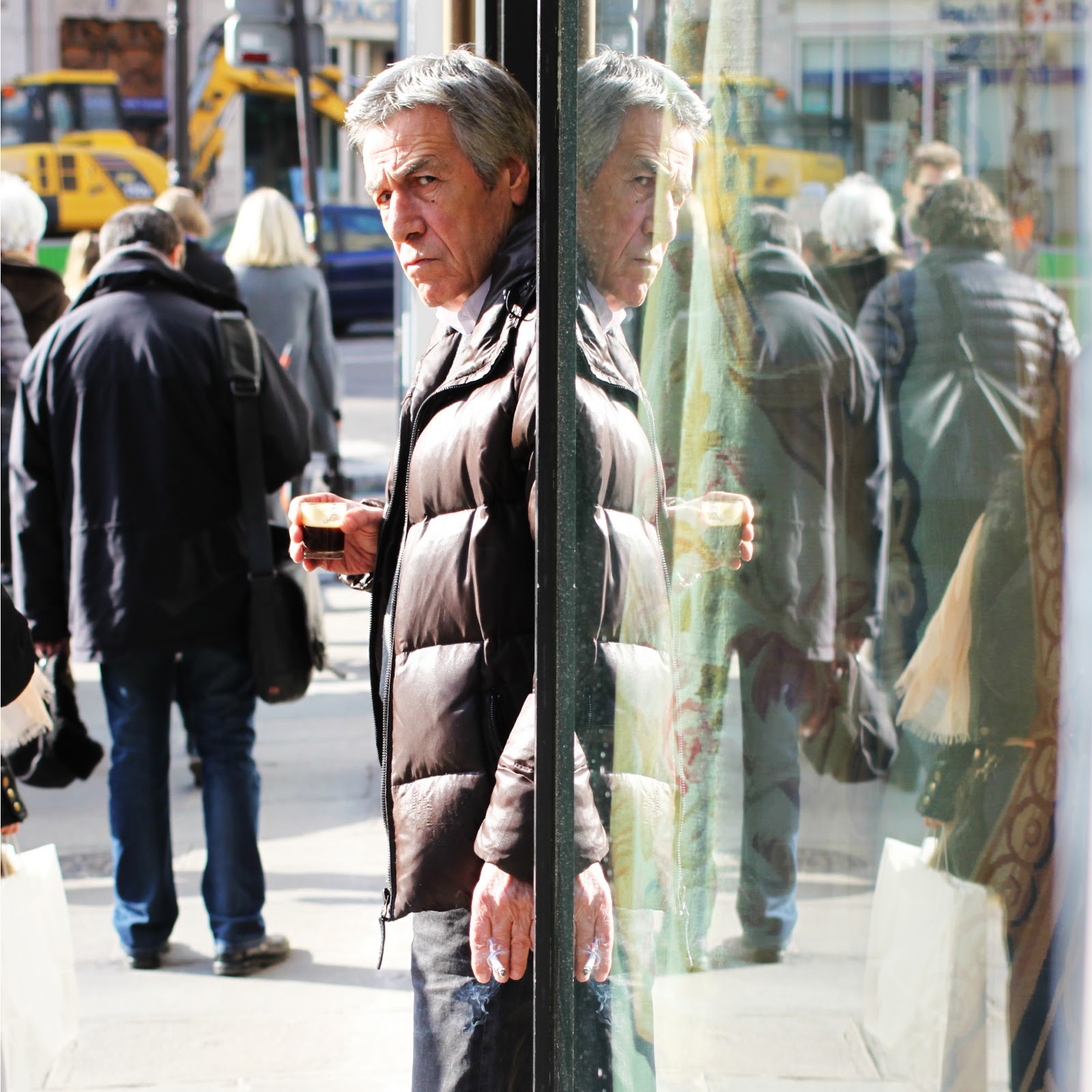 What can you do if your morning isn't going so well? You may have different ideas, but for me, everything seems better after the first cup of coffee.

Please only link posts that have a photo or photos that contain a visual reflection.  Reflections can be on water,glass,metal or anything else as long as we can see the reflection.If needed, click the link near the top right corner for instructions. Now, lets have some fun with Weekend Reflections!
Posted by James at 11:00 AM

Comme dit Malyss—but clearly the caffeine high hasn't kicked in yet! Bravo to you for not letting that scowl deter you, James.

I'm not so sure this guy's coffee is doing the trick!!! Great shot! Was he annoyed that you were taking his pic???

The everyman. At first glance I thought - I know him! Then, no...just an oh so typical sight. Brilliant capture!

Brrrr ! He looks like a killer in action... Pour him some coffe, James, please : we need a smile on that sunny face.

Ah, Pause Café, I know it well. I may even have a reflection from there, but I know that I got a shot of some killer shoes - hah!

Your portrait shows all the character and perhaps a bit of suspicion in the man's face. I think that I would like it it b/w also.

Thanks for the reminder, James. I always think of you on Friday postings but have been so preoccupied that I have been reluctant to enter without a commitment to participate in the discussion. I will today and over the weekend and will be better about a post here in the future.

A rather stern face beautifully captured in reality and reflection!

I too wonder if it was being photographed that made him look so grumpy. I have not photographed people unless it was in a crowd or my family because I was not sure about legally being able to publish people's images unless I had permission. Is that something about which I should be concerned or not?
oh, yes, I ALWAYS am amazed at your relection choices.

Double realities exist in great balance.
I really like this shot.

Another one of your great portrait reflections. Like them James.

It simply amazes me how you get these shots!...:)JP

You are brave! That look would have sent me running...

thank you, James, for going into depth about my question about photographing people; I appreciate it so much.

What an intense look on that guy's face! Great reflection :)

Very good---looks like a shot in a spy movie. MB

He is not a happy camper! Great photo James. I need to get back on here...

2 shots of coffee for one - eh James

I LOVE this shot James. You nailed a great expression and the espresso in his hand. Parfait my friend.
V

Everything seems better after that first morning coffee, but I think he may need another :)