Bricks in a Puddle (Weekend Reflections # 263) 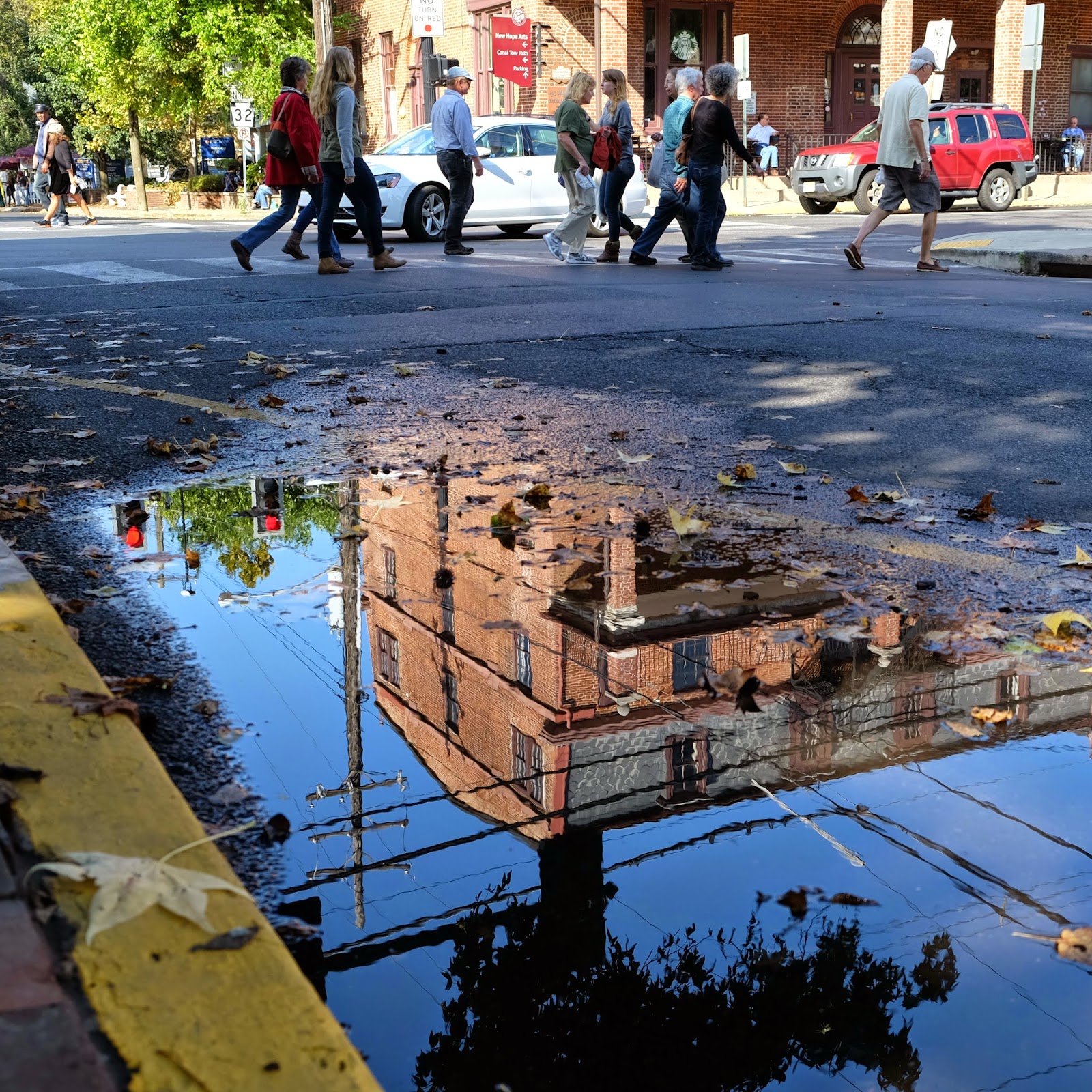 I don't know what this brick building used to be, but these days it's a Starbucks.

Today is my 27th wedding anniversary. Happy anniversary, Vicki! Time sure flies when you're having a good time.

Have a great weekend!

This is the place to see and share reflections. Click the rules tab above for more information.
A Reflection =  An image given back by a reflecting surface.
Posted by James at 11:00 AM

Happy anniversary to both of you James... Wow, 27 years of life together, that is huge !!!

I love your picture : it has such a cool sunny Fall's atmosphere...

Enjoy your day ; it is a precious gift.

27 ans , ce sont les noces d'acajou ; Happy birthday to you both , I hope you'll have a great celebration !

Happy anniversary! And that's a great reflection! (and a big Starbucks)

Captured on a pretty fall day!! Happy Anniversary ~ We just hit our 30th...and I agree - better and better!

Isn't everything (a Starbucks, that is)?
Happy Anniversary to the two of you!

Happy Anniversary :). Great reflection you have today. Our fall rainy season has begun (vancouver) and I'm loving all the puddle reflections which I've missed all summer.

pretty! i like the leaf on the curb, too.

happy anniversary to you and your lovely mate!

I love puddle reflections! This one is soooo good. :)

A beautifully clear reflections, James. Puddle reflections, though I love them, creep me out a little. I have a slight fear of heights and looking into a puddle like that makes me feel like if I stepped into it, I would fall "up" or in, which ever the case may be. Great post, James, as always.

Andrea @ From the Sol

Wishing you and your wife a very happy anniversary James:-)

Happy Anniversary! I could use a starbucks right about now, I need a post-lunch caffeine fix.

Neat reflection. Coffee sounds good to me, too. Happy Anniversary!

Congratulations on the wedding anniversary. 27 years is a long time to be together.
Have a big party and a happy weekend.

I love photographing puddles, people always look me as if I'm doing something pointless. :D

Congratulations for you and Vicki! May your lives be an eternal celebration. :)

James, I cannot tell you the number of times in Paris and Budapest that Alexa and I said, "James would like this one!" Love this puddle reflection.

Wishing you and Vicki a happy anniversary!

Happy Anniversary James to you and your wife and thanks for hosting this meme. Love the reflection of this building in the puddle

Happy anniversary!! This is a great puddle reflection!

That is one of the best puddle shots I have seen. Happy Anniversary!

Debbie at Travel with Intent said...

Such clarity for a reflection.
Congrats to both of you on 27 years!

happy anniversary to you and Vicki! I think this shot, James, has the most unreflected space in any of your photos I've seen.

Another great reflection and of course - Happy Anniversary.

Another wonderful photo, James!!! And Happy Anniversary to you and Vicki! air hugs to you both...:)JP

Happy Anniversary, James and Vicki. Wishing you many more.

Congratulations to you both on 27 years of loving, learning, growing and understanding. May your celebrations mark the beginning of many more loving years together.
Thank you too, James, for the time you put aside to host Weekend Reflection - it is appreciated by many.

Happy anniversary to you both.. fantastic celebratory reflection James :)

Happy Anniversary! What a clear reflection in just a puddle - lovely!

As crisp as always and congrats with your 27th wedding anniversary. A kind of mirror on your life.

Congratulations with your anniversary and I hope you will have many more years together. The reflection is stunning for a pool!

Hi! Very beautiful! Thanks for sharing.

That's great! I find myself wanting to say, "Don't fall in!"

Hi James ! Thanks for your comment on my blog... I've answer it :

"The symbol on the left is a "triskel" : http://en.wikipedia.org/wiki/Triskelion

Thanks for your visit, James, and have a nice week-end."

It is a symbol very strong in the part of Britanny where I live.

The anarchist symbol is there because Brittanian are quite rebellious againt our state ; they fight a lot for their rights ; the most radical of them are called "bonnets rouges" (http://fr.wikipedia.org/wiki/Mouvement_des_Bonnets_rouges), it referes to the French revolution (http://en.wikipedia.org/wiki/Phrygian_cap).

Happy 27th anniversary! Lovely photo, such depth in the puddle. Always pays to look up (and down).

Congratulations to the anniversary !!!
And a great shot with a clear reflection. Amazing !
Best regards, Synnöve