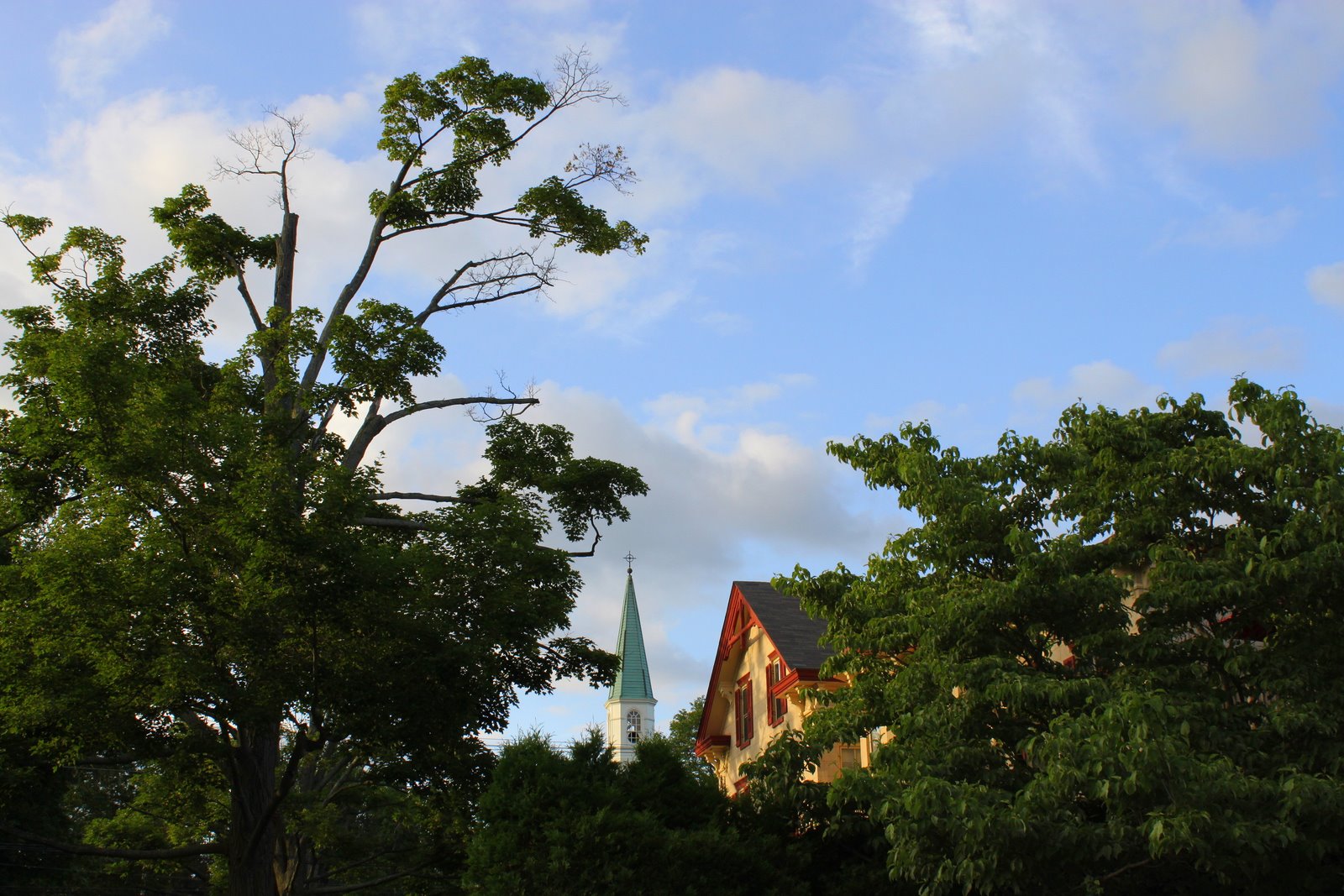 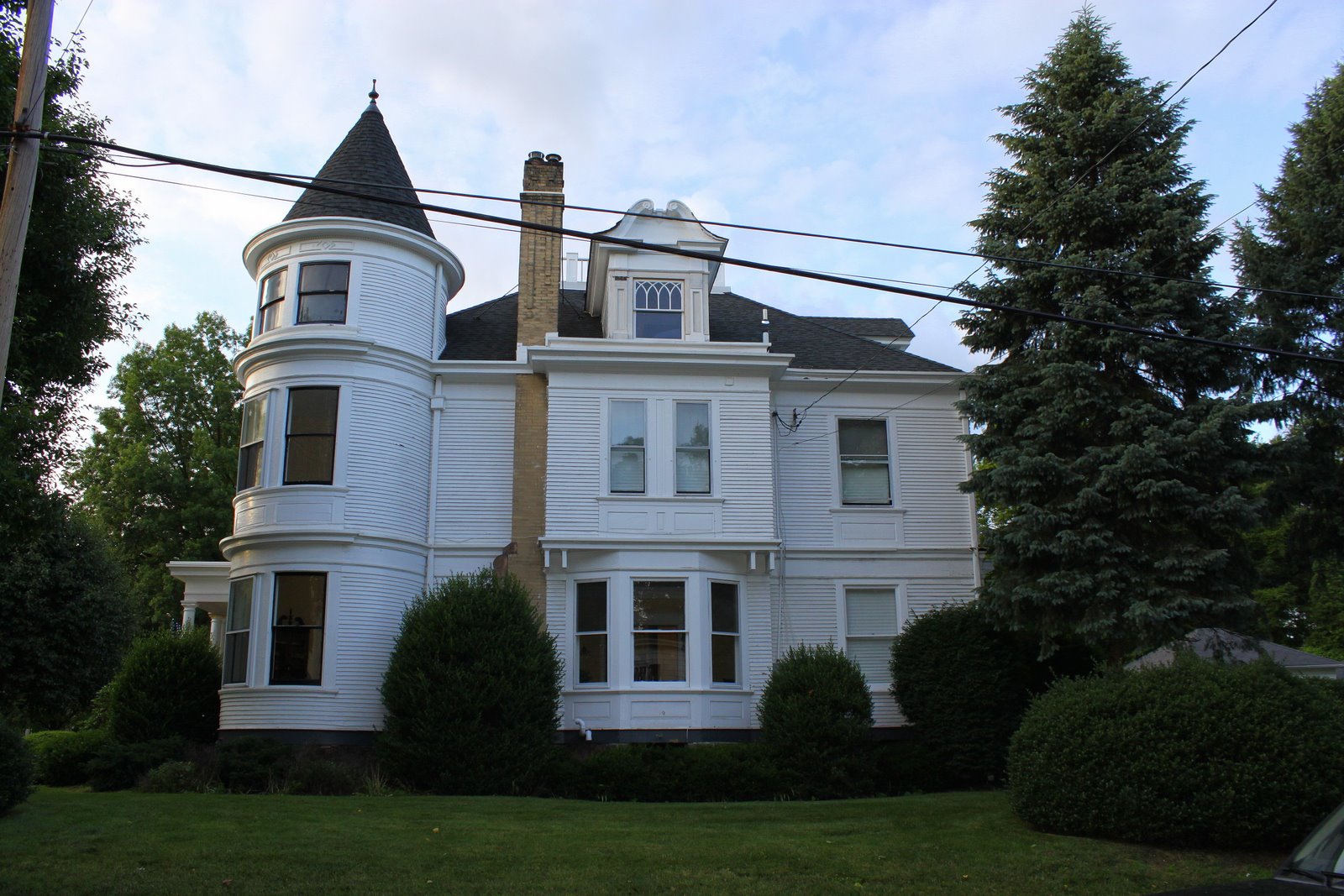 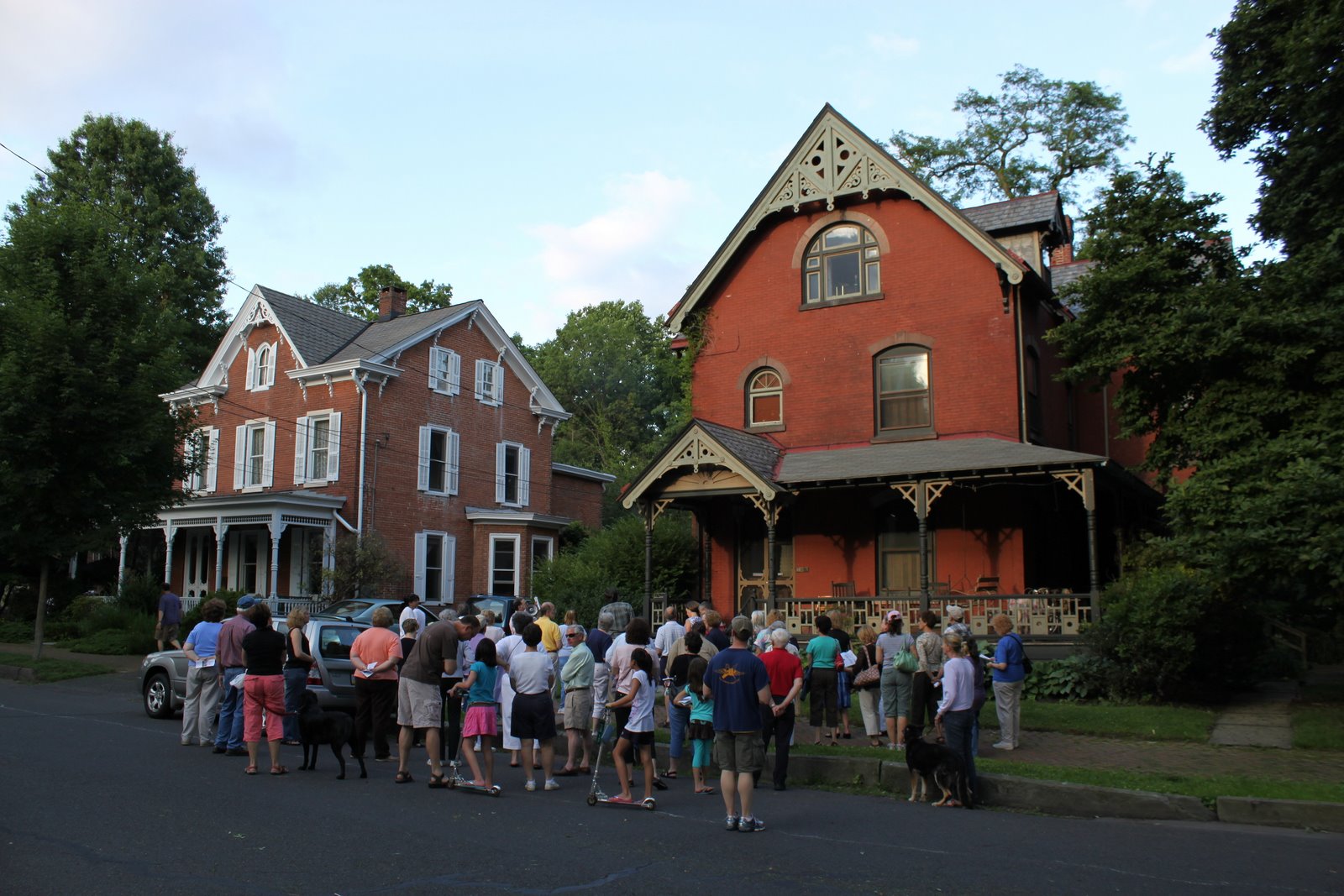 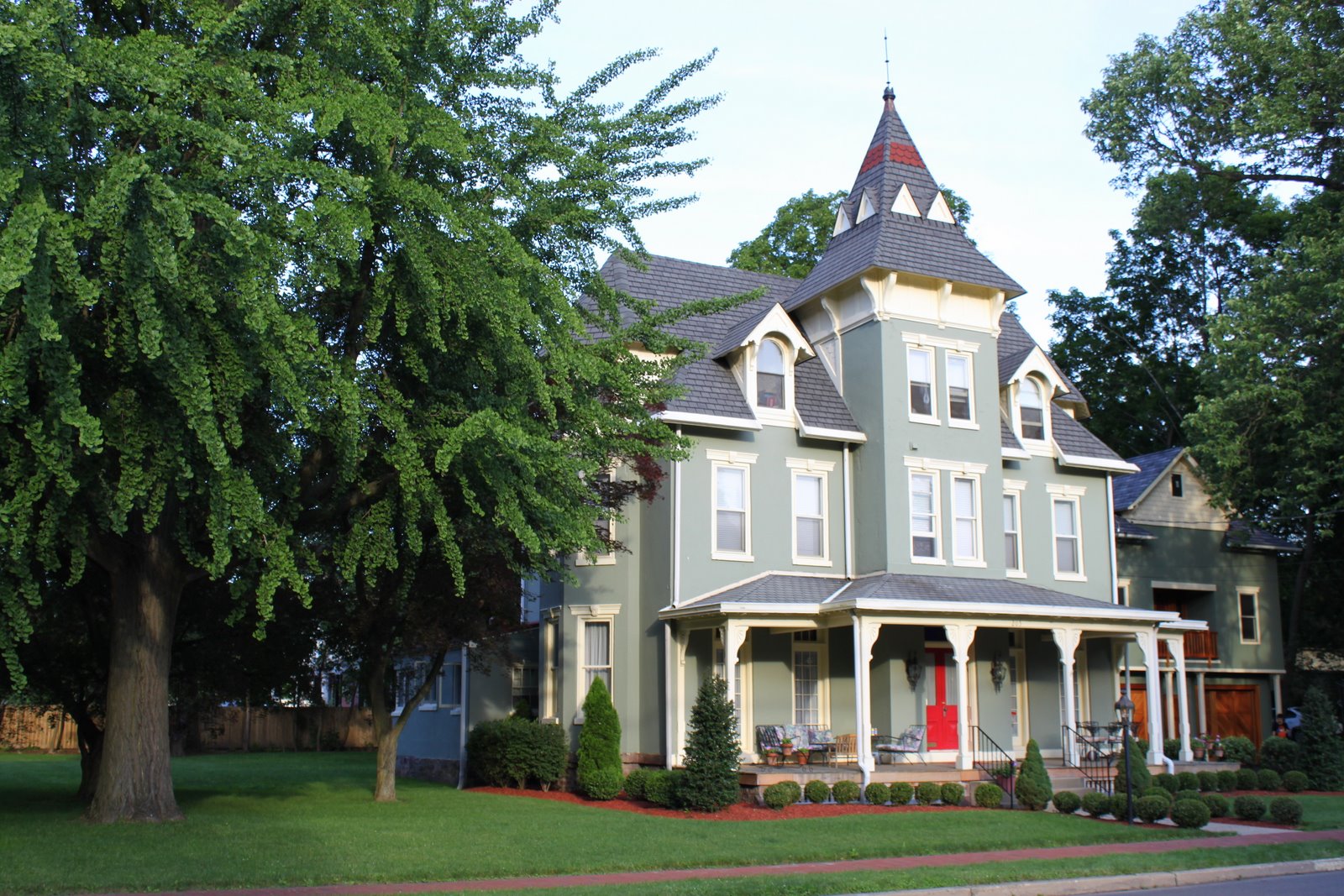 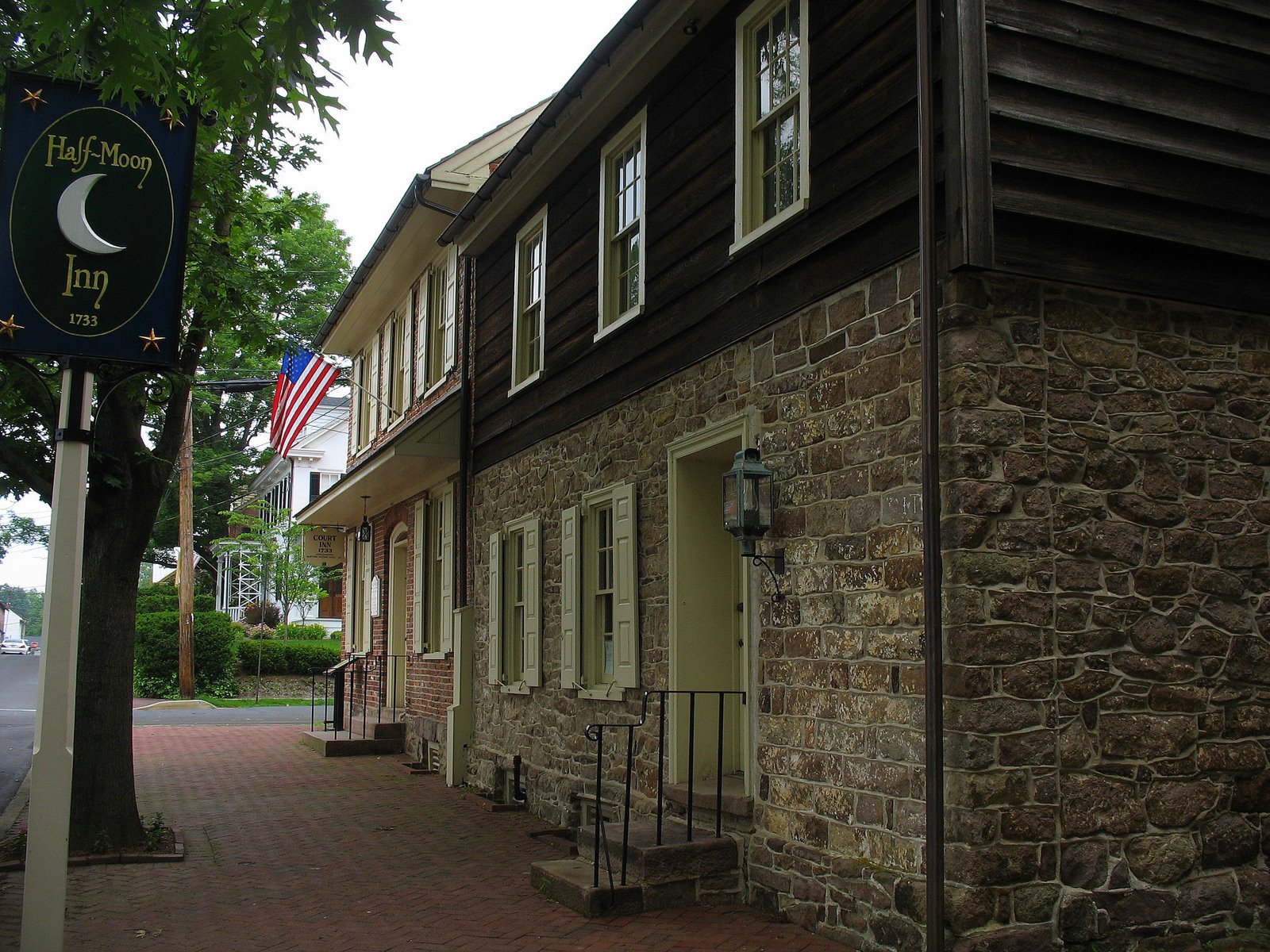 At 6:30pm on Friday I with camera in tote walked over to the historic Half -Moon Inn also known as the Court Inn (built in 1733) and gathered together with about thirty other people for a historic homes walking tour. The tour was led by members of the Newtown Historic Association. We walked around for about an hour as the guide gave a little history about Newtown and described the different styles of houses along the tour. The tour mainly focused on homes built in the 19th century. I didn't catch most of what he was saying because I was straying away and taking pictures but from what I heard there are lots of Victorian era and queen Anne styled homes also some of the homes have whats called French roofs. What I found interesting is the contrast of styles from pre and post railroad era. Pre-railroad the houses were built with a limited amount of mostly local material and post railroad opened things up as they could easily import material from far away. It makes sense but I'd never really thought about that before.

Anyway here are some of the homes that I saw on the walking tour.
This is My World. I you would like to see other My World Tuesday posts please click here.
Posted by James at 4:08 PM

What a wonderful tour! And what lovely old homes! I love the Half Moon Inn! Your photos are terrific! Thanks so much for the interesting tour!

Have a great week, James!

Oh what beautiful houses. I would love to tour old homes too. I would be straying too and clicking to my heart's content. Your photos were lovely.

There are some fantastic homes in there, great pics.

Have a great week
Guy
Regina In Pictures

Beautiful and chic houses!
Great pictures!
thanks for sharing
Léia

The historic houses sure look gorgeous.

I need to come and see these in person one day. They are beautiful houses.

Pennsylvania is a wonderful state. Your town looks lovely.

Those homes remind of some of the homes I saw last summer when I went to Yarmouth, Nova Scotia. They were of the same architectural style with one slight difference. Some of them still had remnants of the old Widow's Walk up on the roofs. I love those old homes....huge! Thanks for the nostalgic trip James.

That was a lovely series of historical photos of these homes.I like the top house first..My World is always an adventure to see all the different places.

Great pictures. I loved the architecture of different houses. Each one of them unique and beautiful.

I would not mind stepping into the second last shot and living in the cross between Cinderella's castle and whiches house.

Nice tour of a set of beautiful house. I never thought of that railroad thing, that is probably very important everywhere.

What a great tour. The houses look just wonderful. :)

Old homes seem to have so much character that is lacking in some of the newer houses. Its nice to tour them and enjoy there history. They each have a story from the past to present.
Lovely photos, James. Thanks for taking us along.

It's nice to see a mix of different styles and eras, isn't it? reminds us that communities live, grow, and change over time - the past makes the present more alive.

beautiful captures james of the homes.
thanks for stopping by my blog. have a great day.

Those are really some beautiful old homes! What a nice way to spend the day.

We use to take part in the Galveston Homes tour every year ... old Victorian homes. I do love to go and visit these lovely places, that, thankfully, are still being loved today. Thanks so much for taking on us the tour of Newton.

Terrific post, James. I love old houses; all old houses. Your photos are excellent and fit right in with your commentary...I had never thought of how railroads would impact house construction, either.

What beautiful houses love the first photo. I wish we were better at history here in Oz we tend to knock old things down.

Those houses are beautiful...

Thankyou so much for taking us along on your tour ... I for one, really appreciate it. I love old homes.