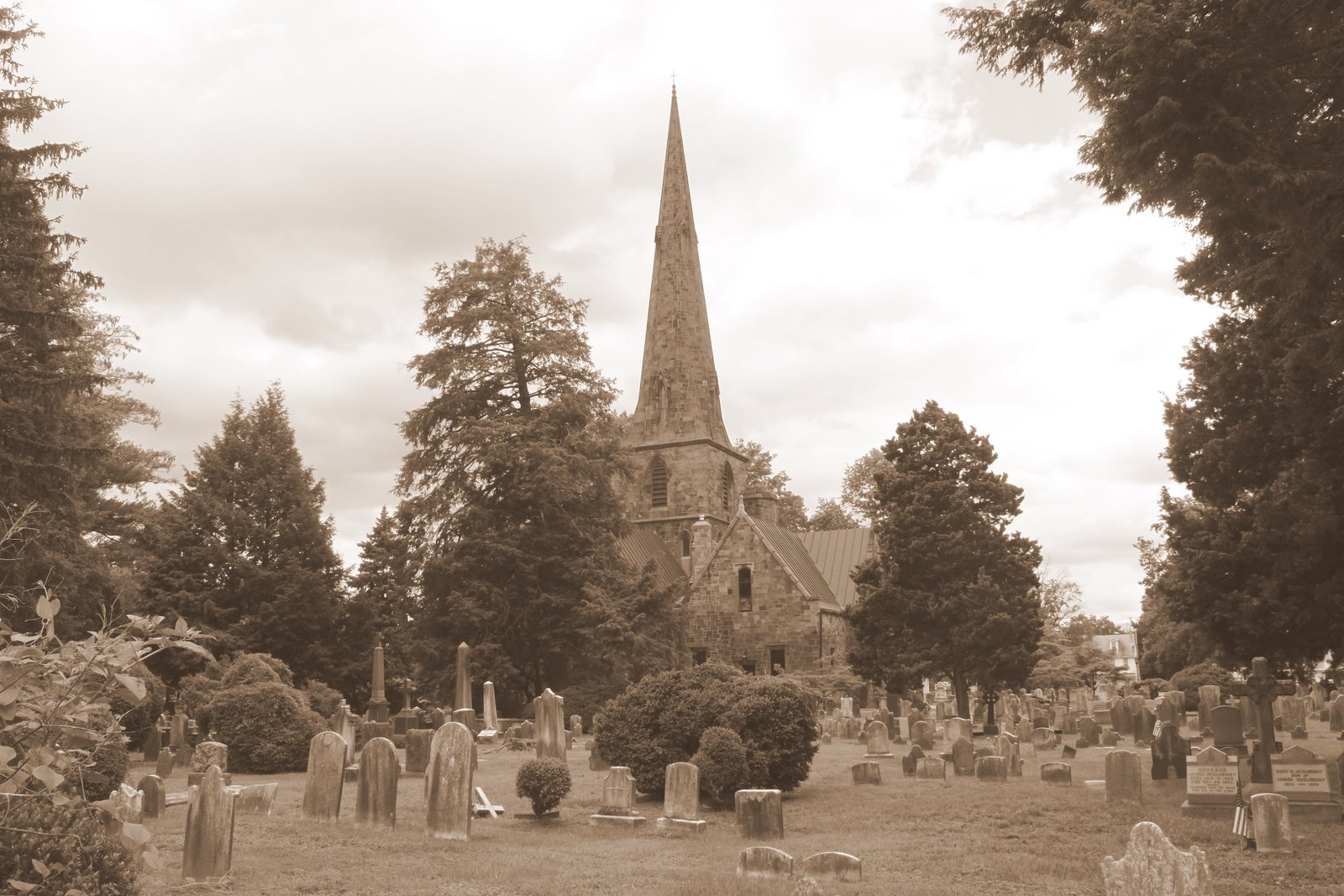 Enlarge picture for a better view

I took this picture from the graveyard at St. Mary's Episcopal Church in Burlington, New Jersey, about a half hour drive from Newtown. The church in the picture is actually the "new" church that was built in 1854, the old church is looks a lot less impressive but was built in 1703 and is the oldest Episcopal church in New Jersey. The graveyard that sits between the two churches dates back to 1695. I look forward to returning and exploring the inside of the churches. I read that the old church's silver communion service was a gift from England's Queen Anne before her death in 1713.
To see the other sepia scenes posts please click here.
Posted by James at 2:13 PM

I love that it's not in color. So fitting. Great shot :)

It's always nice to see graveyard near the church. Beautiful image.

I love the stonework on the church and your framing of the shot.
The age of the church surrounded by the old gravestones makes it perfect for the sepia rendering.
How fascinating about the silver service.
Loved your post.
My post is here: Carletta’s Captures.

Hello dear friend!
A fabulous sepia shot!
This church looks great and I think the outside scenery was perfect for this theme and a sepia picture! Great choice!
God bless you
Léia
btw, waiting for more pictures from this church!!!!

It's magnificent! Being an Episcopalian, I would love to attend a service in that church. I hope you can post pictures of the inside sometime.

this church in stone has the feel of those in the Northeast. The old burial ground in back of the building is typical as well. The sepia does a great job in muting the external colors as the monochrome almost forces to look at the subject. Nice!

Great photo. We don't have any old churches like that in the little town I live in. I need to get out and explore more.
http://www.ageorgiaangel.com/blog/?p=1040

Great shot James...you can almost hear the graveyard moans from here! I love old cemetary's; walking thru them and trying to imagine what life was like for those that lived, died and are buried there.

This is a great scene to convert to sepia. Nice job.

Looks like a vintage scene. I'm just expecting women in long black dresses to come with flowers.
I've enjoyed my tour thru the recent posts. You are really sharing some lovely scenes. Church on Green St. is a stunning photo.

There are many treasures to be found inside and out. I, personally, love the cemeteries.

Beautiful shot. It reminds me of a very old English church and cemetery.

Most of sepias you see around are a bit unreal, but this one is very good, plausible and well done. Really a great post.

I love the view over the headstones of the steeple rising in the background. I also enjoy reading your blurbs of history. It makes the shot that much more interesting.

I was going to say the same thing my husband (Ralph) said - that the old stone church looks like New England. I guess New Jersey is not that far away!

The church and ancient burying ground are perfect subjects for sepia. Interesting history you gave us as well. Sorry I'm late visiting.

Thanks for coming to see my Sepia Scene.

I can't forgive myself for missing this one! Great to view when enlarged!